Standing 18 inches in length, our Hansa Ant Eater stuffed animal is a truly unique piece. Our artisans did a fabulous job making this life like, with details you won't find from any other plush company. Meticulously hand made, our ant eater sports a beautiful luxurious plush body with detailed coloring, a long snout typical of an ant eater and a sweet little face. Be the first to have an ant eater in your collection!

Its name is a hint to one of its favorite foods, and you can't miss its long snout. Giant anteaters walk with a slow shuffle on all four legs with their nose pointed to the ground. They don't walk on their feet; instead, with the claws curled up into the feet, anteaters walk on their "fists."

The first time I saw this guy I knew I must meet him in person. Ok, I mean buy. His super fat epic tail alone would be enough to attract immediate attention. I'm not sure how little kids would react once they see him for the first time - he's a very unusual animal, after all; but hardly would they be scared because he has a very kind face. I think the kindest I've seen among Hansa and other brands' soft toys alike. But it might be just my specimen, as I'm long aware that each Hansa animal has a personality (not in a way things do, but in the animate way). His tail is as epic in real life (I know no other word for what it is). He has very cute kinds of fur in different places (try the black one on his chest and the one on his belly and then the white thing, they're all somehow different). His nose is beautiful, too, but not the kind of nose he would poke into your affairs with. I believe he is very playable although I didn't mean to have him as a toy but rather as a friend for myself. And a good friend he will be. I don't see a reason why people who are not instantly repelled by his quaint unusual appearance (although he IS more attractive than your average faceless lifeless teddy bear) could not like him once they meet him in real life. If you doubt whether you should buy him I'd recommend to stop hesitating and do buy him. If you're choosing between several different animals I still recommend him because he is really special. I like Hansa toys in general and I share my house with a lot of them but even among them he is somehow unique. (The photo I've attached is of him with his new pals, also from Hansa; they have something in common; maybe it's the nose).

I love this ant-eater he is a great toy & has a nice gentle face, feel though that he could have had a bit more stuffing put in him! other-wise I love him.

The "Bath" Tissue Stand is made of metal and can accommodate 3 double-rolls of toilet paper, 1 on the ready to use spindle and 2 conveniently stack...

Clear recently viewed
Ask A Question
Customers rate us 4.8/5 based on 27441 reviews. 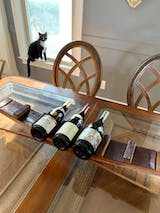